Press enter to begin your search

Last weekend Marcus and I travelled south of San Francisco to Mountain View for a  Sys Admin conference for Marcus' work! I was excited to see a little more of California and he was excited to network 😉

Our journey started on Thursday night with the train. I thought it was really cool that we could take public transit from one city to several other cities several hours away. We got to the station and spent only about 5 minute being totally confused. Then we figured out where we were meant to be:

We got on the train and got some great seats 🙂 I packed us juice for the ride and I was stoked on it:

Never without my juice

Marcus was mostly just stoked for the train ride itself. We love travel.

He was just on the brink of not containing himself

I also brought along a little crunchy veggie snack for the ride.

We got to our hotel around 8, and we were both really taken aback by how calm and serene Mountain View was. We have been in cities for so long we forgot what smaller towns could feel like. No people were yelling. No loud music. No cars racing by. Just nature and quiet. We settled in for our night routine on our giant bed:

We watched an episode of Silicon Valley, for the novelty of watching a show set in a place where we were physically.

Marcus got packed hummus for dinner, because I am an organized wifey:

Good wife? I am going to go with yes, because I would like to feel good about myself.

I had mangoes because mangoes are one of the BEST travel foods - they don't get smashed to bits in your backpack, and are easy to eat. You can even eat them with no plates or utensils if you wanted to!

Time to dig in.

On Friday morning Marcus headed out to his conference, and I did my yoga and writing and regular morning routine:

For lunch we headed into town. We took a bus from our hotel for about 1 minute and were down town. This is because Mountain View is a small town! Our hotel was totally out of town, yet pretty much right next to town. The street was quiet and organized and calm. We were weirded out by it 😉

I had some tea at a cafe and it was lovely and also very much what an old person would do.

I am really much older that I pretend to be

For dinner we decided to go to Sweet Tomatoes. I will give you the backstory on why I wanted to go here so badly:

The first time I went to Sweet Tomatoes was back when I still lived in Calgary, and my friend from church took me to California for a vacation. Keep in mind that I was eating a predominately raw foods diet, and in Calgary they are known for their Beef. Sweet Tomatoes is a giant all you can eat salad bar, so this is pretty much the first time in my life I had ever seen so much fresh produce all in one place. Since then I have always wanted to go back, and constantly reminded Marcus and Sammi about how magical it was. Then when we figured out that we would be moving to California, naturally the first thing I did was look to the internet to tell if me if there were any Sweet Tomatoes near where we were going to live. Sadly, there are not. But there was one in Mountain View! So we figured out the path to get there, which of course was a beautiful nature trail. We laced up and headed out:

You can take the girl out of the dance...

About 50 minutes later, we arrived all blissed out and nature filled.

I brought my own dressing that I made in this mustard bottle, and feasted on several plates of fresh veggies.

I wants what I want

Marcus enjoyed the soups, salads and breads, but in all honesty I think he was mostly there for the ice cream.

Oh well. At least he has some veggies first.

After dinner we trecked home and passed out. It must have been all that fresh air.

Saturday morning was the last day of Marcus' conference, so he headed out and I chilled at the hotel.

Then I walked to where the conference was.  The path to get there was through a forest. Go figure.

Seriously, what was that place?

The conference was held at the Computer History Museum and it looked pretty spectacular:

Basically, Marcus is a big nerd.

Then Marcus and I decided to forgo the 1 minute bus ride and walked ourselves back into town. On the way we found a cute little produce store:

In that store we found dates! I have been searching high and low all over San Fran for these dates and I think they just do not exist here. So I was pretty excited to see them.

Oh dates. Why are you so hard to find?

Once in town Marcus had a bite to eat and I did some blogging while we waited for our train.

I did a little train track posing:

All about the trains on this trip

And then it was time to head home. For this trip we accidentally purchased the wrong tickets, paying waaayy less then we should have, and thought we were going to go get kicked off the train. We let the man monitoring tickets know that we just got confused, and he said it was fine this time. Woop woop! Honesty is always the best policy.

Marcus was pretty pooped at this point:

Less stoked here than at the beginning

Even though he was exhausted, I dragged him to Whole Foods on our way home from the train. I got some melons out of the deal. 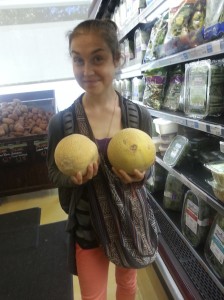 Oh hey, check out my melons

Then it was just one more bus and we were home!

You Are Worthy Of Your Own Love

You Are Worthy Of Your Own Love