Press enter to begin your search

The Weekend We Turned 4

Time for another personal post about us! Last weekend Marcus and I celebrated our 4 year dating anniversary 🙂 It was a very fun weekend - i'll be it, not exactly all that much out of our norm - and I want to show you what we did!

On Saturday I got up to do my yoga and meditation practice. It was lovely. On weekdays I usually get my full practice done before Marcus wakes up, and on weekends sometimes I can get my butt out of bed early enough to make that happen, other times I don't. This weekend Marcus got to watch me breathe funny and stand with my leg above my head 🙂

After practice it was time to go to the Ferry Building Farmers Market.  I was SO excited and had been looking forward to going since before I moved to San Francisco! It was - technically speaking - the first REAL farmers market I have ever been to - meaning all local farmers and businesses with local, organic seasonal produce. In Vancouver I went to the Granville Island market several times a week, but they carry lots of imported stuff.

The trip started with a ridiculous hill climb. I wanted to walk a different way (that I had planned using a map, because we had a specific designation and it is nice to know hot to get to that destination) to avoid the hills, but Marcus wanted to walk the seawall, so made me climb Mount Everest.

At the top of the hill we realized we had accidentally walked directly into a tourist trap! This is a windy street, and there were a million people there to see it? I don't really understand.

Trapped at a tourist trap but not being a tourist.

Then, we walked up and down a few more hills, realized that the street Marcus took us on did NOT lead to the sea wall, so we ended up walking down to the street I had wanted to take in the first place to get to the sea wall. So essentially we climbed several death hills for no reason. But it was cool to see new parts of the city I had not yet seen! Good thing we are fit.

Look at that view!

Finally we made it to the sea wall. I was quite literally skipping at this point because I was so excited to see the market. This is what being a food nerd feels like folks.

This is how I look when my mind is being blown

The market was everything I hoped it would be! Lines of stalls with fresh peaches, apricots, citrus, avocado, greens - and we even found a local date farmer! I could have wandered around there 'tasting' samples all day. It is similar to Costco in the sense that you could go there and have a full meal just made up of samples.  Only at the market it is samples of fruits, not steak and puff pastries.

They call it that for a reason

After the farmers market we walked down Market Street - which is very aptly named. Many carts selling everything from jewelry to soaps to linens and more. The only sad part was that it really reminded me of Chiang Mai and made me homesick for Thailand. But alas, we will return one day!

From Market street we walked for another 20 or so minutes and arrived at the SOMA Whole Foods. Now, keep in mind that I am Canadian, and did not even see a Whole Foods until we moved to Vancouver 4 years ago. So seeing a real AMERICAN Whole Foods was very cool for me! So many things. 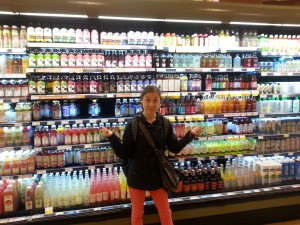 We wandered around and looked at all the neat items they had - many raw treats I had never seen before. Also the wall of fermented drinks was quite impressive. Who knew Americans liked rotten fruit juices and teas so much? We also saw a lot of sweet tea drinks - another thing that must be distinctly American.

Marcus proceeded to do his normal Marcus thing and take about a half century to decide what he wanted for lunch. When this poor man is left without a plan and a thousand options you know you are in for lots of wandering, pondering and not deciding on anything. He finally settled on a falafel sandwich - and then the deli lady told him they were out of falafel - so this falafel sandwich was actually made with hummus, tomato, and a weird potato cake. He enjoyed it none the less and the angels rejoiced.

I had rotten coconut water with berries 😉

I am coocoo for coconut dranks

Then for our third new thing of the day, we took the bus home! A passenger sitting next to us was eating a giant box of raisins and asked me if I wanted some. San Fran people are awesome.

He really wanted to take this picture with me

We then unpacked and admired our farmers market loot. We love parsley, dates and vegan Kim Chi! 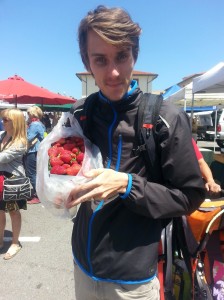 I cannot even tell you how amazing those strawberries were.

We also got some oranges, which were amazing. If you follow me on Instagram, you will know that I ate them for dinner many, many nights.

After that we decided to head up to Polk street, and on our way we saw this really normal looking fire truck.

We got ourselves some special anniversa-TEA (Get it? Get it?) and took a really creepy selfie:

Why are we so creepy?

I am not exactly sure why we are so creepy, but it turns out we are. Then there was some normal yoga in the park behavior:

Then we went home because we are wild and crazy like that.

Upon Marcus' request, I set to work making some home made vegan chocolate peanut butter cups for him. He helped me out too, which is always way more fun for me than standing in the kitchen by myself.

I was really excited.

To top the weekend off, Marcus enjoyed his Peanut butter cups, and also the hummus I slaved over a hot blender to create. Are you noticing the theme of how much he loves hummus? I am pretty certain he could live off it, and would live off it given the option.

He was also really excited.

What do you usually get up to on the weekends?
<3

Why Letting Go Of Your Painful Story Feels So Hard, And How To Do It Anyway, Part 2

Why Letting Go Of Your Painful Story Feels So Hard, And How To Do It Anyway, Part 2